I was in Goa for the week this theme was announced and busy with things other than the Challenge. The most obvious interpretation of the word – “Sports” is NOT something I’m interested in at all; and so this was the toughest challenge for me so far. I struggled to come up with ideas and when I did, it was almost always too late and someone had posted before me! I took many pictures of my son playing cricket, but I couldn’t find any that hit the spot. I came back home to Bangalore 5 days later…with time running out and still stuck. In desperation I took a few shots of a Beer Mug with ‘scored’ glass but it didn’t feel right. Then while cleaning out my junk drawer I found my eye-test result and as it so often does – something clicked! And so I took this picture for the Challenge. It is my first monochrome submission and I’m quite happy with it 🙂 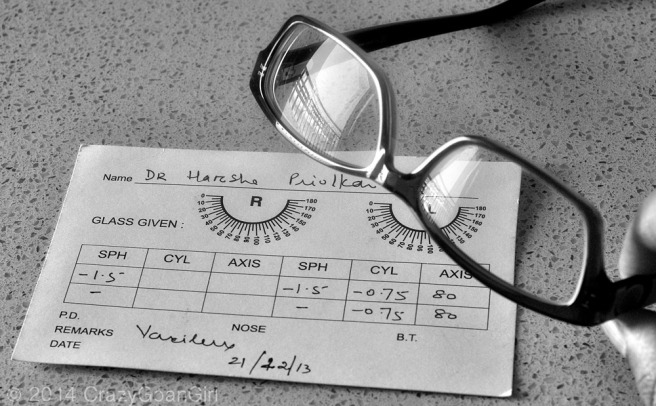 Of course in keeping with Murphy’s Law…once I was done with this picture, I began to get a few more ideas and on delving into my archives, I found a few pictures that seemed to fit the theme! What would you have shot for this theme? Do share!

Game score. Played around in Photoshop for this one and used the picture from last week’s challenge as backdrop.

Scored Glass. I liked that the reflection was clear and that the handles looked like spectacles 😉

Scored Wisdom. I wrote this Haiku for NaPoWriMo 2013 and paired it with the image of an old, scored tree stump that screamed Character!

Scored Fruit. The Breadfruit tree in my Mom’s garden is just a few years younger than me and infinitely more productive 😉